Although there was a Manor House on the site in medieval times the building we now know as ‘The Manor House’ dates ‘only’ from the 17th Century.  Major alterations and extensions were made during the 1800’s and of course new rooms and facilities have been added in recent years.

During the 19th Century Radcliffe was home to several excellent cricketers; one of them, George Parr was born at the Manor House.  George Parr captained Nottinghamshire and England and led undefeated cricket teams to America in 1859 and Australia and New Zealand in 1863-4.  There is still a flourishing cricket club in the village today.

Another resident of the Manor House was James Gorse; a Nottingham business man.  He campaigned for a gas supply to be brought to the village, this happened in 1867.  James Gorse was also active in promoting efficient drainage, water supplies and sanitation at the time when illnesses such as scarlet fever or typhoid fever were having devastating effects on the villagers. James Gorse was also involved with the rebuilding of the Church and replacing the bells.  We can imagine him and his family of eight children looking out towards the Church and the busy village roads.  In 1861 the Manor House had five bedrooms and a nursery and was worth £40 a year.  Sadly it was not to last.  James suffered financial difficulties and he and his family had to leave the Manor House and he later became bankrupt. 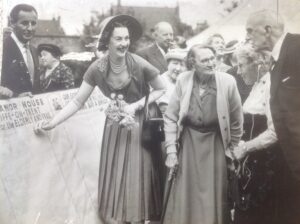 The Manor House became a charitable residential home in 1955.  In the early days it was suitable for people who were still able to live fairly independent lives in flatlets, with some help available when necessary.  In 1969 the rent for these flatlets was 2 guineas a week, while full board cost 5 guineas weekly.

Hopefully the centuries when the Manor House was a happy family home helps to provide the background for a warm and caring home today.

(With thanks to Pam Priestland for the use of material from her book on the history of Radcliffe, copies of which are on sale in the library.)

Thanks to the RHS We are very pleased to say that we have a book available packed with interesting old photographs. The book also explores the fascinating life of George Parr a very early cricketer who captained Notts and England was born in the Manor House. He was known as ‘the lion of the North’ and led the England cricket team on the first ever overseas tour. If you would like to buy a copy of the book please contact the home.

This website uses cookies so that we can provide you with the best user experience possible. Cookie information is stored in your browser and performs functions such as recognising you when you return to our website and helping our team to understand which sections of the website you find most interesting and useful.

Strictly Necessary Cookie should be enabled at all times so that we can save your preferences for cookie settings.

If you disable this cookie, we will not be able to save your preferences. This means that every time you visit this website you will need to enable or disable cookies again.